Understanding the symptoms associated with the various stages of dementia will help you make the decision about the right time to seek San Diego memory care for your loved one. Early on, it is easy to miss the signs of dementia, especially when the person lives alone. People often refer to the “early stages of dementia” or, later on, to more “advanced stages,” during which symptoms become more apparent. In fact, there are seven distinct stages, which are based on the symptoms experienced at any point in the progression of the disease. 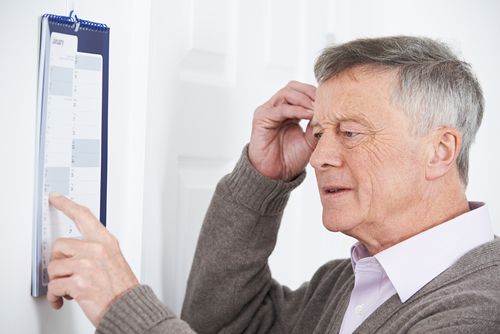 Doctors often use the Reisberg Scale, often called the GDS, to separate the seven stages of the disease. Although this scale includes multiple stages within the categories of “No Dementia” and “Mid-Stage Dementia”, it further separates the symptoms for a more accurate diagnosis. This is essential for developing the right treatment plan since there is no specific test for diagnosing it. Also, there are medications that help to slow the progression of the disease but symptoms cannot be reversed.

Medications are used to treat the different symptoms of dementia. Some treat memory loss while others are used to treat behavioral changes or sleep disorders. Most of these drugs are only effective during the early stages and for a short period of time. The most valuable thing you can do for your loved one is to get quality San Diego memory care that will keep their mind active as long as possible.

The Seven Stages of Dementia:

People who experience no memory loss and are mentally healthy are considered stage 1. According to the scale, every person without dementia is classified as Stage 1.

Those in Stage 2 have very mild cognitive decline. They experience occasional forgetfulness that appears to be normal for their age. You aren’t likely to notice these symptoms and neither is their physician.

This stage of cognitive decline includes more frequent forgetfulness and the beginning of a decline in concentration. The person in Stage 3 dementia often performs normal tasks less efficiently. They may have problems finding the right words or get lost when going places they are familiar with.

The people who live with the person may notice the symptoms during this stage. It is more difficult to realize the decline in their cognitive abilities from a distance. On average, Stage 3 lasts for seven years before progressing to actual dementia.

During Stage 4, the person experiences a moderate cognitive decline. They begin to forget attending recent events and have problems managing their finances. They may be unable to travel to new locations without getting lost.

It isn’t unusual for people in Stage 4 to withdraw from their loved ones because of the difficulties they have socializing. Loss of memory and problems recalling names or finding the right words makes it difficult to socialize. Physicians can detect a decline in cognitive abilities by examining the patient and interviewing them. Denial of their symptoms sometimes makes them resistant to doctor’s appointments. Stage 4 lasts an average of two years.

During this stage, loss of memory is more pronounced. Most people require help performing normal daily activities such as preparing meals and bathing. During Stage 5, the need for professional and compassionate San Diego memory care may be necessary. People who live alone often stop doing daily tasks like bathing. They may wear the same clothes day after day and have difficulty distinguishing day from night.

People in Stage 6 dementia often forget the names of those closest to them. They can’t remember recent events and often recall some details of events from the past. They are unable to complete simple tasks and their ability to speak diminishes. Loss of bladder and bowel control often occurs and personality changes begin to take place. Stage 6 dementia patients often believe things that aren’t true, begin to show compulsive behavior, and they may become anxious or agitated. Caring for the person becomes difficult to impossible for loved ones as the person becomes more resistant to performing normal activities.

Caregivers in a specialized San Diego memory care facility know the special needs of dementia patients in every stage. They have the skills and the experience to provide their residents with the physical care they need while also providing activities that bring them greater happiness and quality of life. Taking care of a loved one with dementia is more than a little challenging. Getting the advanced level of care they need from a memory care facility is the best choice for the patient and for their family members.

The final stage in the scale is very severe cognitive decline. During Stage 7, the person is no longer able to speak or communicate and they often can’t walk. They need help with almost everything they do including eating and using the toilet. Stage 7 lasts an average of two-and-a-half years.

The Need for Dementia Care

As you can see from these stages, dementia is more than simple memory loss. Although the time period of each stage varies among patients, the disease progresses over a period of several years. Although many people continue to care for themselves during the first two stages, obvious changes in their abilities and behaviors begin to take place during Stage 3. By the time they enter Stage 4, their abilities decline. How long they are safe in their own homes depends on the individual and their rate of decline in cognitive abilities.

In addition to memory loss, dementia also increases the risk of falls. The patient may forget to take medications or forget that they have already taken their medications. They could forget to turn off the stove and may leave food cooking unattended.

During the earlier stages, the person will be able to prepare and eat nutritious meals, take safety precautions while walking and showering, and even take care of their finances. Over time, these simple tasks become overwhelming and put them at risk of fires, falls, and other health and safety risks.

Once your loved one is no longer safe in their own home, it’s time to look into San Diego memory care. Contact Lakeside Manor to schedule a tour of our facility and get the special care you need for your loved one and for your peace of mind.