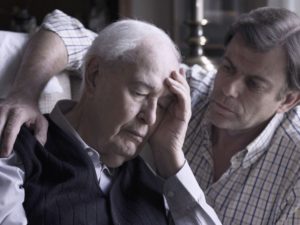 Alzheimer’s disease is one of the most heartbreaking conditions that can occur to anyone. Long before the affected individual needs to be placed in an San Diego assisted living Alzheimer’s facility, the impact is often more pronounced on the person’s loved ones than it is on the individual with the disease. This is because the person who is affected often fails to realize that anything is happening to them. At the same time, the people around them experience the loss of the personality that makes the person who they are.

Exactly What is Alzheimer’s Disease? 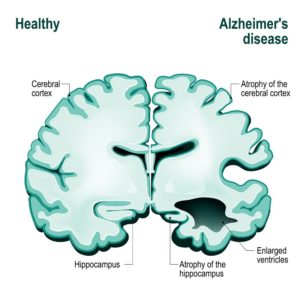 Alzheimer’s is a disease that causes progressive deterioration of the brain. It is one form of dementia and the most common type. Most cases occur in people over the age of sixty-five, but early onset Alzheimer’s can occur in adults as early as their 40s or 50s. These cases only account for about 5% of all cases. The early age of these victims makes it more likely that they will be misdiagnosed. Be aware that your parent doesn’t have to be a senior to develop this devastating disease.

The progression of Alzheimer’s is caused by the destruction and death of nerve cells. As cell loss continues, the following common symptoms may occur:

The Three Stage of Alzheimer’s Disease

Alzheimer’s typically has three stages of severity including a mild early stage, moderate middle stage, and severe late stage. Some people will go through the first two stages faster than others and become unable to care for themselves much earlier. In others, progression through the first two stages takes place slowly over a period of years. Stages can also overlap, making it more difficult to determine how far the disease has progressed.

Since the symptoms of Alzheimer’s are much less noticeable in the beginning stage of the disease, it may go unnoticed. Sometimes the symptoms are easier to detect in retrospect. You may need to take a proactive approach to detecting the disease if your parent is in the early stages.

There is no test that can be used for a definitive diagnosis of Alzheimer’s. The changes the disease causes to the brain can only be detected through microscopic examination after death. Instead, it is diagnosed through a process of elimination. Tests may be performed to rule out other conditions that cause similar symptoms, leaving Alzheimer’s as the only potential explanation.

How to Spot Early Symptoms of Dementia 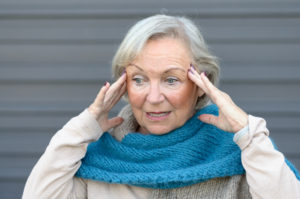 You should be aware that Alzheimer’s is a real possibility for your parent at almost any age. If your parent lives alone, you aren’t as likely to notice subtle changes as the symptoms of the disease begin to emerge.

It is a good idea to show some interest in the various aspects of your parent’s life so you can monitor any behavior changes. At the same time, your parent may resent it if you suddenly begin to show too much interest in their finances or medical care. Being aware of early symptoms is important enough to make yourself a little pushy. If a parent lives alone, their well-being could easily depend on your persistence at getting a diagnosis. Early diagnosis and treatment, along with finding a good assisted living memory care facility in California, will provide the best care for their condition.

People with dementia are often confused about dates, times, or issues involving money. They have difficulty following directions, and they can get lost easily, even in places that are familiar to them. You may notice that your parent is not taking care of him or herself. They may not be eating a good diet, not bathing, and wearing the same clothes day after day.

It is important that you don’t dismiss memory loss and confusion as normal signs of aging. We all forget where we put things sometimes or have trouble thinking of someone’s name. Alzheimer’s produces the type of memory loss that causes a person to forget themselves and the people they know and love the most.

If your parent doesn’t live alone, a spouse or other family member in the same house is more likely to notice changes in behavior. If one parent discusses the need to place the other into an assisted living Alzheimer’s facility, be understanding. The burden of care is often too much for another individual who is going through the aging process as well.

A good way to keep track of your parent’s health is to ask casual questions that aren’t overly intrusive. For example, “When was your last doctor’s appointment?” or “Are you current on your prescriptions?” If your parent is unable to answer these simple questions, it may be time to start digging a little bit deeper.

If your parent is confused by your questions, they may also become agitated and evasive. If you don’t get a straightforward answer, there may be a reason for concern. You may feel awkward for pushing your parent to give you answers to questions that they consider personal. Just remember that you are doing it for their well-being.

Where to Go for Help

Don’t delay in getting help for your parent if you suspect they may have Alzheimer’s. Early diagnosis and treatment are the best options for preserving your parent’s condition and making them feel as good as possible. Although Alzheimer’s can’t be stopped, new treatments may be able to slow it down. Once you realize that your parent has the disease, you will want to get the most from every day you have with them.

Schedule an appointment with a neurologist who specializes in dementia and Alzheimer’s for an evaluation. You may need to ask your parent’s physician for a referral. Once the diagnosis has been made, talk to the specialist about the need for assisted living Alzheimer’s patients often need round-the-clock care and supervision to ensure they are safe, happy, and well cared for.

Why You Shouldn’t Go At It Alone

No one else has the same feelings for your parent as you and your siblings. It is far too easy to take on the responsibility of care out of a feeling of concern or obligation. You want to do what is best for the person who did the same for you when they brought you into the world.

This feeling of obligation is the very reason why you want to place your parent into an assisted living dementia facility in California. As the disease progresses, they are going to need an increasing level of care. Very few adults have the time, strength, and energy to provide the type of care that an Alzheimer’s patient requires.

If you are just now trying to determine if your parent has Alzheimer’s, you haven’t yet experienced the full impact of the disease. Although your biggest worry today may be that they aren’t paying their bills on time or taking their prescriptions as needed, things can literally change in a day.

Tomorrow, next week, or next month, your parent may be unable or unwilling to get in and out of the bathtub, stop eating, or begin to wander away from their home. These are just some of the issues that can be addressed in the care of professionals who understand what the disease can do to the individuals who have it and their families.

One of the biggest advantages an assisted living memory care facility in California offers is the ability of the patient to still do as many things for themselves as possible. Having the right amount of assistance allows them to retain their independence and enjoy the opportunities that each new day brings.

To learn more about Lakeside Manor, contact us today. We make memory care a part of our life and a part of your parent’s life. We look forward to hearing from you and would be happy to setup a tour of our warm and welcoming Alzheimer’s and Dementia Assisted Living Facility.