Aging brings about changes in people, and they go beyond an individual’s appearance. If you have an older relative, you’ve probably noticed them exhibiting more examples of difficult behavior lately.

We got to know them growing up as these gentle, loving, and caring people. To see them suddenly become more aggressive, unruly, and even borderline abusive can be heartbreaking. It’s a challenging transformation to deal with for sure, but there are ways to make that task more manageable.

In this article, we’ll talk about the things you can do to better cope during situations where your elderly relatives are misbehaving. We’ll also discuss the different reasons why they exhibit such behavior and highlight some examples too.

The Possible Causes of Bad Behavior in Elderly Individuals

Before you can attempt to reach out and reconnect with your misbehaving relatives, you first need to understand where they’re coming from.

Putting yourself in their shoes to understand how they feel is next to impossible. Even so, we can take what we know about aging and its impact on people and use that information to deepen our knowledge. We can use what we understand about aging to gain some insight into why the behavior of an older loved one has changed.

Part of growing into a mature individual is becoming independent. After years of relying on our parents and relatives for food, shelter, and other living expenses, we can work on our own and sustain ourselves.

Plenty of people value that independence. They love the fact that they are in complete control of their own lives.

When you reach a certain age, though, you may wind up having to give up that independence. Whether it’s due to health problems or an inability to earn money due to old age, you may find yourself having to rely heavily on others again.

Many people don’t like being in that situation. As a result, they may lash out, disobey, and rebel even if they know it’s detrimental to them. It’s a plight that many of us still cannot wrap our heads around, but one that is profoundly frustrating for older individuals.

Deterioration of Physical Capabilities Due to Illness or Injury

According to the Centers for Disease Control and Prevention, millions of people over the age of sixty-five suffer from falls every year. Furthermore, about three million annually are taken to emergency rooms across the country to get their fall-related injuries treated.

Weakened lower bodies, poor eyesight, and struggles with coordination all combine to make older people more prone to falls. For younger individuals, falls are mostly no big deal. If you’re older, however, even a fall in your living room can lead to broken bones and other serious injuries that can leave you bedridden.

Certain illnesses also have a way of impacting the body that can leave senior citizens struggling to move.

No longer moving on their own is another likely source of frustration and anger. Being stuck in bed could cause them to lash out in negative ways.

Depression Due to the Loss of Friends and/or Family Members

Many of us tend to envision depression as a condition that keeps people wallowing in misery while they stay under the covers. It’s true that for many people that’s how their depression seeps out, but that is not the case for all.

You may find people who become angrier as they spiral deeper into depression. A previously mild-mannered and kind individual may grow resentful and often become irate due to their condition.

Older people can exhibit signs of depression in that way as well. They could be behaving badly because they are depressed.

As for the reason why they’re depressed, it could relate to them losing their friends and family members. Dealing with the loss of so many loved ones is never going to be easy. You can quickly find yourself mired in the pits of despair because so many people you love dearly are now gone.

Processing that grief is not easy. Some may sob quietly, but others may let their anger take over.

The Onset of Dementia

Dementia is a condition often associated with old age. We still don’t know everything about dementia, but we are aware of the changes it can bring about in people.

The condition is known for having a significant impact on a person’s mind. It can cause memory problems, disorientation, and general struggles with reasoning and critical thinking.

The Mayo Clinic also notes that dementia can cause psychological changes. People who have dementia are known to display symptoms of anxiety, depression, and paranoia. They also tend to become agitated more easily and display inappropriate behavior more often.

If you’ve noticed a sudden change in your older loved one’s behavior, don’t hesitate to take them to a doctor. Their new personality may not be the manifestation of a foul mood. It could be indicative of a long-term condition.

A General Sense of Distress

One more possible explanation for why your loved one is suddenly displaying difficult behavior could be due to a general sense of distress. They may be worried about their health, about their loved ones, and about their status in general.

Experiencing that distress can be incredibly difficult. They may try to cope any way they can, even if that means displaying bad behavior. 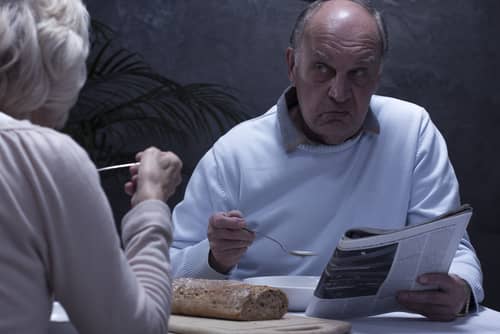 The Examples of Difficult Behavior Elderly Individuals May Exhibit

Bad behavior in seniors can take on many forms. You can get caught off guard if you’re not aware of them beforehand. Included in this section are ways in which elderly individuals often misbehave.

It’s shocking to see your older relatives yelling and lashing out at the people around them, but it can happen. They may struggle to express their anger and frustration through physical actions, but they can verbalize it clearly through yelling.

If you’re older loved one is still moving around on their own, their outbursts of bad behavior may involve them going into a fit of rage. They may start throwing things around the place or cause a ruckus in other ways.

Difficult behavior can also become more targeted. Some older individuals may exhibit abusive behavior as a last-ditch effort to rebel against their current reality.

Having to deal with so many complicated and sorrowful emotions all at once can lead to a person taking out their anger on whoever’s nearby. You or a caretaker could be the person on the receiving end of that abusive behavior.

The manifestation of bad behavior in some older individuals is that they become clingy. They always want you around and demand all your time, even while knowing that you have other important matters to handle. You can understand why they cling to you so dearly, but at the same time, it’s not good for you or them.

There are times when an older person misbehaving can have a real impact on their wellbeing. They may refuse to shower, eat their meals, or even take their medicine.

That behavior is obviously concerning. You must act right away if you want to save them from doing lasting harm to their health.

Hallucinating and becoming paranoid are unfortunate symptoms of diseases that are related to aging. Seeing your older loved one suffer from hallucinations and paranoia is genuinely heartbreaking. You must learn how to deal with their behavior properly if you want to help them out.

Even if you do understand why your older relative is misbehaving, it’s still not something you should tolerate. Tolerating the bad behavior could lead to more serious problems down the line for both you and your older loved ones.

Included in this section are the different ways to cope with the difficult behavior exhibited by older relatives.

Talk to Your Older Relative

It all must start with communication. You won’t understand how to help your older relative unless you talk to them first.

Reach out to your loved one. Tell them that you’re here to listen to their problems. Let them know that they can confide in you and that you’ll do everything you can to help them out.

You’ll be amazed at how effective simple communication can be in these situations.

If you’re loved one has been diagnosed with a condition such as Alzheimer’s disease, communicating with them will be tougher. Still, there are ways to get them to communicate if you put in the effort to bridge the gap between the two of you.

Once you know the specific reason why they have been acting out, it will be easier for you to react and provide an appropriate response.

This may seem counterintuitive at first. If your relative is suffering from paranoia or delusions, one would think that acknowledging what they’re saying could lead to their condition getting worse.

What we fail to understand, though, that to them, those are not delusions. They may look and feel real to them due to their condition.

By dismissing what they’re saying, all you’re doing is giving them a reason to distrust you. That’s the last thing you want.

Instead, acknowledge their concerns, say that you understand, and present them with a way to handle the problem. Since you’re acknowledging and listening to their concerns, they are more likely to welcome the help you’re offering.

You should also try to acknowledge their feelings. Don’t dismiss their grievances right away, even if they may seem minor at first.

Allow your loved ones to voice their feelings of fear, abandonment, and other negative emotions. They may be suffering from depression at the moment. You may never find that out until you take the time to listen to what they have to say.

When they do open up, make sure you’re there for them. Comfort them and let them lean on you for a while.

Give Them Opportunities to Make Decisions

The loss of independence can be tough for some senior citizens. Imagine for a second if you had to cede the decisions in your life suddenly. You probably wouldn’t be too keen on that either.

Leaving your elderly loved one to their own devices is not advisable, but you can still involve them in making some decisions.

Give them some semblance of control over their lives again, and they will surely appreciate it.

Also, seek their feedback regarding some more important decisions. For example, if you’re planning on moving them to a new assisted living facility, you can ask them where they would like to stay.

The difficult behavior can wear on you too. You may find yourself feeling exhausted every day because you’re trying to keep up with their demands.

Don’t allow that to continue.

You must watch out for yourself. Ask a family member or a professional caregiver to help now and then. Doing so will also discourage the excessive clinginess that your older relative may be exhibiting.

Unfortunately, there are times when you cannot do enough to help your older relative. This is especially true if the reason why they’re misbehaving is due to a condition of some kind.

Don’t be afraid to ask for professional help.

Approach a doctor and seek help from professional caregivers. They are the ones who can handle the situation, and they can also tell you how to deal with your relative’s behavior moving forward.

Dealing with the difficult displays of behavior coming from your older loved ones can be incredibly taxing. Know that you don’t have to do things on your own.

Partner with us at Lakeside Manor if you’re looking for an assisted living facility that can care for your elderly relative. Contact us today to learn more about how we can help.

Who Can Override Power of Attorney?

What is Durable Power of Attorney?

When to Move from Assisted Living to Memory Care